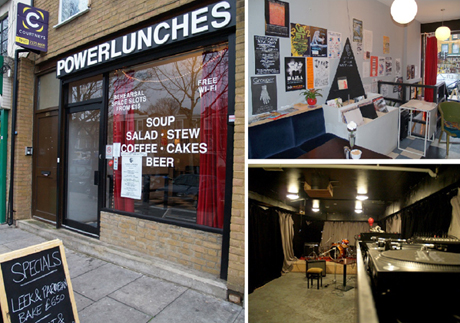 If it weren’t for the sign in the window advertising ‘Rehearsal Space Slots from £15’, you could easily walk past Dalston’s Power Lunches Arts Café without noticing it for what it is: one of the fastest growing hubs of the Hackney music scene.

Once inside, though, all becomes clear. Despite the full menu of fresh food and drink, the real passion here is music. With gig posters covering the walls, stacks of vinyl adorning the bar, and a miniature record store in the front, Power Lunches is designed to be a place that Hackney’s music community can call home.

“I’ve been a musician for years,” explains Sian Dorrer, the café’s owner, “and even though there was always a really good music scene in this area, there was never a place that was run by musicians, for musicians.”

Since it opened in July, Power Lunches has sought to change that. In the day, it operates as a café upstairs and a rehearsal space downstairs. At night, the rehearsal space becomes a music venue, hosting local bands mostly, but also acts from around the UK and beyond.

The response has been fantastic. Although gigs were originally planned for only Friday and Saturday nights, the demand from artists, promoters and fans has been so great that Power Lunches will soon be hosting live music four or five nights a week.

Dorrer attributes this success to the sense of community her team has worked to build. “Yes it’s a business,” she says. “It has to make money to survive, but that’s not the priority. The priority is to keep a community of musicians going.”

That community is reflected in the staff itself. Dorrer performs with two local acts and her staff members are active in the same scene, whether by performing in bands, working with labels, or both. “It’s a bit incestuous,” she admits, “but we’re not cliquey.”

With that in mind, Dorrer wants the space to be open to all varieties of artists and fans.

When I popped by, I had the chance to watch New Noveta, an experimental noise and performance art duo, as they were recording. The two discovered Power Lunches at a gig, but quickly came to appreciate it as a space to rehearse and record. “There’s nowhere else this cheap,” they said.

Dorrer’s vision for the place is clear: “I want people to dance and have fun,” she says. “If you’re at a hardcore punk gig, I don’t expect you to sit quietly and enjoy your chamomile tea.”