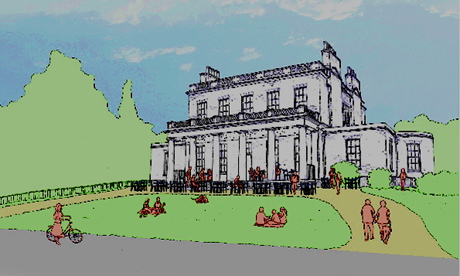 This has taken the form of somewhat predictable debates over the new facilities such as the skate park, but it has also centred on the deaths of three of the park zoo’s deer — two from dog attacks and the third from ‘shock’ — which took place as the work was ongoing.

Now anger has flared over the newly restored café in Clissold House, with an unprecedented number of readers leaving passionate comments on the matter on this newspaper’s website.

The gist of many of these contributions is that the café is too fancy and overpriced — the kind of place more suited to the rarefied streets of Hampstead than down-to-earth Hackney.

No one can deny that our borough, and in particular Stoke Newington, has become progressively more middle class in recent years, but the old guard lives on despite the preponderance of hipsters, and the Town Hall should have seen this disharmony brewing early last year when it effectively barred local traders from competing for the contract to run the café in decreeing that only companies with an annual turnover of £1 million or more could have a pop.

Far from a storm in a teacup, this row is indicative of the way some residents feel they are being priced out of their own neighbourhoods. The glib argument that our borough is much like anywhere else, and that gentrification will continue unimpeded until Hackney becomes Islington and Waltham Forest becomes Hackney, is belied by the sheer force of opposition.

Clissold Park café ‘too posh’ and ‘too pricey’