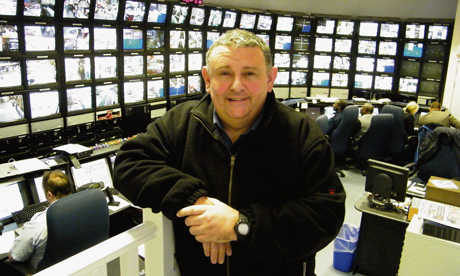 Below Stoke Newington’s Town Hall, in a former WW2 bunker, Hackney is observed from on high in Hackney Council’s CCTV headquarters.

Before entering the offices behind a secured door, I give my personal details to a receptionist, who photographs my face and my right index fingerprint.  She assures me this is for convenience should I need to re-enter.  “Fingerprinting is just easier.  People kept losing their passes.  It was costing us at least £200 a month to replace them.”

I also sign a waiver promising to remain discreet concerning any sensitive information I may venture across during my encounter.

In a few minutes, I’m met by jovial CCTV Manager Andy Wells who vigorously shakes my hand and leads me through the operations of the department – both the building’s hub of observation and office rooms and the complex association of public and private sector organisations that cooperate to the benefit of the CCTV network.

Andy has been working for Hackney Council since 1992 in the CCTV and Emergency Planning (EP) Service.  Some of the resources at hand in Stoke Newington Town Hall, the base of the EP Unit, are a generator to power it for three days, and a supply of water, canned foods, and even clothes to cover the needs of up to 500 displaced persons.

The EP team is largely but not solely comprised of ex-military personnel due to the nature of its work.  “They have the experience and skills to respond to emergency situations,” Andy told me.  They must act quickly and decisively in situations of emergency to ensure as much as safety for the general public as possible.

Andy himself has not worked for the military, though his background is in the defence industry. When I spoke to him, he had recently been up in the middle of the night dealing with a major incident, rerouting local traffic, assisting Hackney Police with forensic examinations, and organising a team to re-house four residents unable to return to their homes.

Although CCTV has been around since the 1970s, Hackney installed ‘camera one’ in 1996, opposite Hackney Central Library on Paragon Road.

The large CCTV headquarters room is lined with screens quartered into sections, flashing images from around the borough – lines of parked cars, traffic lights, courtyards of council estates, and public toilets.

“Those images are on the backburner,” Andy says.  “Although they do make an impressive impact for our funders, our focus is on the screens in front of us.”

Each workstation comprises two screens.  One screen focuses on the image from an individual camera, of which 210 in the borough are manoeuvrable using a joystick built into the console.  The controllable features are panning, tilt and zoom.  Pursuit cameras, placed high up on buildings can read a license plate from up to a mile away.

The other is a touch screen showing a map of the borough with small red boxes marking the location of cameras.  The operators can run their fingers across the streets to select different cameras and follow a burglar or stolen car with the ease of playing a video game.

In addition to Hackney’s cameras, the police may also have covert surveillance cameras set up in the borough for special operations.  Surveillance images from their work are likely to be used in a current case, along with archival footage.  All of Hackney’s CCTV footage is stored for 28 days, unless it is requested for evidence.

All the operators are trained to watch for particular kinds of suspicious behaviour and to log whenever an individual’s activity catches their notice.  For example if an operator notices someone waiting in front of a train station for an unusually long time s/he might take notice and train the camera on this individual.

As soon as this process of deliberate surveillance begins, the activity of watching, the place of observation, the camera used and the CCTV operator him/herself are logged.  If the activity turns out to be nothing more banal than the tardy arrival of a friend, this is logged as well. After five idle minutes the camera returns to its set position.

If the watched person, upon noticing the whirr of the camera repositioning its gaze, feels as if their privacy has been invaded, their complaint, ideally, can be met with a justifiable excuse for the incursion.

One complaint came from a resident who felt that a camera was peering into her flat.  The Homerton-based camera was set up to view a traffic accident hotspot.  “The camera could see into her apartment, in the distance, but it was not directed at her.  We advised her to get curtains like the other people in the building.”

When asked if the council would ever use CCTV technology to deliberately view the interior of someone’s home, Andy says, “Its not entirely impossible.  We wouldn’t do it routinely, but what if there was a fire and we could manage to see access points, or people trapped inside?  We would use all the resources at hand.”

Andy tells me, “We need to be accountable.  Our team is trained in the Human Rights Act and we don’t watch people without reason.”

A camera placed on top of a 16 storey building has the capacity to zoom in on a bus driver.  We could literally read the words off the newspaper he glanced at whilst stuck in traffic.  The ability of these long-range cameras to zoom in and read number plates has contributed to the recovery of over £2m worth of stolen vehicles.

A screen watched by the environmental team shows the Ridley Road public toilets for signs of prostitution, drug use, and graffiti.  Signs on the front of the toilets admonish those who enter to go in one at a time or the CCTV operator will contact officers at the adjacent police station.

“People are letting their kids go into those toilets now.  That’s a good sign.”