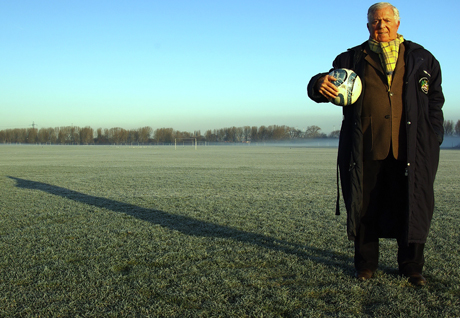 Johnnie Walker shakes his head as he looks down over a drizzly Sunday morning of football on the Marshes. “The Olympics has cost us dearly,” declares the chairman of the Hackney and Leyton Sunday football league.

From the first floor of the recently-built South Marshes Centre, the pitches across the largest expanse of playing fields in Europe stretch out as far as the eye can see. They are home to around 1,500 regular players and have nurtured such talent as David Beckham and Bobby Moore over more than half a century.

But now the iconic leagues are under threat as the Olympics swallow up the land around them.

“We’ve lost some of our best pitches permanently in the Arena Field,” Johnnie Walker says.

They have been replaced by a five-storey media centre which was initially struggling to attract a buyer post-Olympics [Ten bids have now been received from would-be tenants].

“We used to play our cup finals there.”

Meanwhile up the road on the East Marshes, a further 12 pitches are being engulfed in tarmac for a temporary car park. There is a written guarantee that the land will be handed back by 2013. However, Mr Walker is wary after a string of broken promises from the London Mayor’s office and the Olympic Delivery Authority (ODA).

“I’ve learnt not to trust them anymore,” he says. “We had to play the whole of last season up there without facilities after they were knocked down early. They also took three of our pitches before they were supposed to.”

“This is all supposed to be ‘legacy’,” he adds, gesturing to the empty room that should be the player’s bar. “It has been empty for 18 months. There are only 26 changing rooms downstairs. We’re changing two teams in one room. It’s a great big complex and such a waste of space.”

Mr Walker calls the temporary and permanent Olympic developments on the Marshes, ‘vandalism’ – a description that chimes with local environmental activists who are angry at the level of damage to wildlife.

Russell Miller has been campaigning through the Hackney Environment Forum and the Hackney Marshes User Group since the work started. Last month he condemned the “unnecessary loss of a large area of woodland and meadow”.

Among the most worrying of all the projects, he says, is the damming of the River Lea with the new Three Mills Lock.

The £23 million project was supposed to enable up to 1.75 million tons of construction materials to arrive by boat as part of the commitment to the ‘greenest Olympics ever‘, but he says it has seen only one barge per week serve the giant Olympic site.

The damming has also taken its toll on wildlife whose natural habitat is along the river, by “significantly interfering with fish migration”.

Mr Miller believes the real objective of the lock was to protect the river from tidal changes, creating clean canals, free from unsightly mud banks – ideal for prime real estate.

It is a theory that is shared by a number of people on the Olympic watchdog site, Games Monitor.

The site published a report in 2005 from the Regents Network, a London canal conservation group highlighting the faults in the lock project.

The report stated: “It is important to consider why British Waterways are suggesting this scheme when it appears to be flawed from the water freight perspective. We consider their motive is more likely to be encouragement and promotion of building development, and not for navigational purposes.”

“The point is, the whole Olympics is a fraud,” Russell says. “Nothing more than speculation on property funded by public money.”

Specifically the public money of Londoners, who pay 38p a week in council tax toward the games, which have cost £9.2 billion. £330 million of which has been used to build the media centre, dubbed ‘the White Elephant’, which was billed as providing a lasting source of employment for the area.

Diane Abbott, MP for Hackney North and Stoke Newington, joined the criticism when she asked questions in a recent article in the Independent about what Hackney has gained. She attacked the Olympics’ failure to bring regeneration to the borough, stating: “In terms of providing jobs for local people, they have been a bitter disappointment.

She has continued to be vociferous: “2012 was won on a promise to radically transform the economic landscape of east London. The immediate focus should be on providing a life-changing programme that would see thousands of unemployed Londoners put into work, with thousands of new jobs being created in the Olympic Park and the Lower Lea Valley.”

Meanwhile Hackney’s directly-elected mayor Jules Pipe has declared he is “determined that this once-in-a-lifetime opportunity will bring skills, training and job opportunities for residents”.

The Olympic Delivery Authority (ODA) has defended what it sees as the positive impact on employment. The organisation told the Hackney Citizen: “We have worked with local councils on job brokerage services specifically for their residents, given them priority access to new jobs and provided training.”

But critics still maintain that the London 2012 Games seem to have missed a number of economic, social and environmental opportunities in Hackney and the other host boroughs.

They say that in a time of ‘austerity’, the 2012 Games could have been an opportunity to leave Hackney with some real investment in the local community – a genuine legacy.

As Russell Miller puts it: “The vast sums of money could have been spent on properly located, sustainable projects for local people.”

*Note: The office of Diane Abbott MP has confirmed that the original figure of 10% that Ms Abbott cited is incorrect. The figure has been amended to 20%.