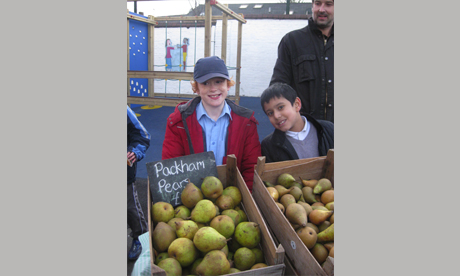 Alfred and Jamil on the Pear Necessities stall

Pupils at Millfields Community School in Clapton transformed their playground into a busy market last month (9 December) as part of an ongoing food education project.

The public market was part of the Farm Academy Programme, organised by the Soil Association in a bid show city children about food production.

The children sold locally-sourced fruit and vegetables alongside cakes and Christmas cards made at the school.

The market follows a school trip in October where the children were given the chance to experience life on an organic farm.

Roz Wilson, head of the citizenship and the sustainable schools project at Millfields explained: “We went down to a farm in October for three days with 15 children. We milked the cows, looked after the chickens and harvested leaks as long as the kids were tall.

“They were fascinated with where food comes from. They tried more vegetables than they probably have in all their lives and they really got a sense of how things work on a farm.”

She added: “We’re just hoping a lot of parents will come and have a look at the vegetables and get interested too.”

William Green, 8, looking after an organic pear juice stall at the market, said: “We learnt all about organic stuff and fair trade and free range. Stuff we didn’t know before.”

His friend, Jameel Mulla, also 8, added: “The best part was milking the cows.”

The market was held in the school playground and stalls were bustling as school children drew in parents, teachers and the public.

Gene Carter, 8, was selling cakes made earlier that day in class. “It’s fun making stalls and selling things,” he said.

The Soil Association’s London Schools Farmers’ Markets Co-ordinator, Helen Carey, heralded the market as a success and outlined plans for the future: “We’ve got three more school coming on board from London and we’re hoping to roll the project out all over the country.”

The project is run with the help of The Food for Life Partnership, a network of schools and communities across England committed to transforming how we think about food.

The initiative is funded by the Big Lottery Fund and led by the Soil Association.