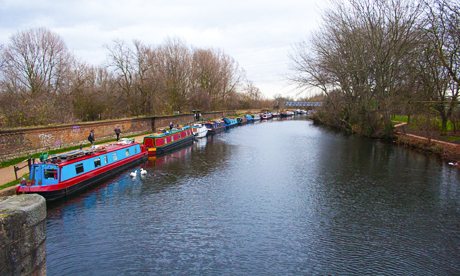 British Waterways (BW) has been accused of “forcing out” Hackney’s boaters after it announced plans to limit mooring times and impose fines for overstaying in an area close to the Olympic site.

The organisation, which looks after waterways including the Regent’s Canal and River Lea, wants those who live on narrowboats to buy visitor passes, some costing in excess of hundreds of pounds per week, to moor in a specially designated zone close to the site.

British Waterways said the measures were necessary to cover the costs of increased security in the area and to ensure all boaters had a chance to book spots close to where the London 2012 Games will take place.

But Hackney boater Frank Kelly, who has to regularly attend Homerton Hospital due to health problems, said the requirement was unreasonable.

He said: “Our boats are our homes. It’s an entirely reasonable thing to expect to live in our homes, to be able to access our jobs, GPs and healthcare, and interact with our chosen community, and not be separated from that.”

While boaters with permanent moorings will be unaffected, continuous cruiser craft such as Mr Kelly’s, which are required by law to make a journey around BW’s network once every two weeks, will have a particularly tough time avoiding the so-called Controlled Mooring Zone (CMZ).

Mr Kelly, who has started a social media protest campaign backed by dozens of other boaters, said he had no problem with restrictions being put in place around the Olympic Stadium but felt British Waterways was trying to profit from paid moorings – a claim the organisation rejects.

He said: “We’re happy to move within a reasonable area, and our movements take us out of the area briefly, but that’s different from being forced out for two or three months.”

A British Waterways spokesperson said: “We’re not looking to profit in any way. It is likely we will just be covering the costs of the extra security we’ll be required to provide for the slots. We want everyone in the country to have the same fair chance to book one of these spots when they’re coming to enjoy the Olympics.

“Boaters within the zones as well have the opportunity to book these spots — if they decide to do that, they will be staying within the zone. Otherwise, we’re working very hard with the local groups to make convenient mooring spots available outside the zone.”

British Waterways’ plans mean boaters will require a visitor pass on what is essentially the entirety of Regent’s Canal, along with Lea River south of Lea Bridge.

Some fear this will push boaters without a permanent mooring west of Little Venice near Paddington and north of Lea Bridge Road in Hackney.

British Waterways said the Controlled Mooring Zone had been created in conjunction with the police, requiring the organisation to have records of all craft travelling within the zone during the Olympics.

The spokesperson added: “The police have asked us also to set up a wider control zone across the waterways in London — they want us to have a record of everyone who comes into and out of that zone, and who is within the zone. There will be checkpoints so the police will have the security of knowing who’s on the waterways at the time.”

The police said discussions about the Controlled Mooring Zone were ongoing.