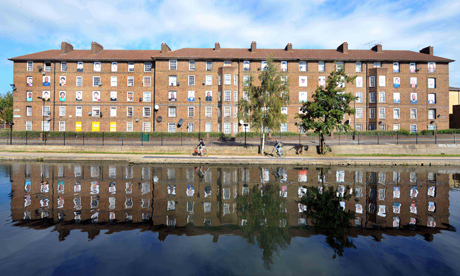 I Am Here is a response to the experience of living in an estate in the process of being regenerated. The housing estate, and Samuel House, is located alongside Regents Canal in between Kingsland Road and Victoria Park. Photograph: Fugitive Images

Andrea Luka Zimmerman and Lasse Johansson are both artists who live on Haggerston & Kingsland Estate and have been capturing its gradual and ongoing demolition. On Wednesday 20 July, they exhibited their work and held a discussion at the Floating Cinema outside Shoreditch Trust’s Waterhouse Restaurant on the Regents Canal.

The artists have placed the regeneration of the estate at the centre of a series of projects documenting the changes in the local area. Their collaboration, Fugitive Images, installed photographs of residents, past and present, on the facade of the estate as part of a project called I Am Here.

Zimmerman said: “We called the project I Am Here instead of We Are Here because we didn’t want to give a sense of coherence and community. What actually is a community? We wanted to say: ‘there are all these different people together in this place.”

The demolition began in 2009 and is due to be completed in 2012 but during this time of transition a greater sense of unity appears to be developing.

“At the moment, we have an open-access estate, people can walk in and out of it. Since the I Am Here project came about, the residents applied for funding, we got a table-tennis table, people have made murals, picnic areas and there are flower beds everywhere. It’s run-down but it’s really beautiful.”

There are 43 flats still occupied within the estate and 15 current residents can be seen in the photographs on the outside of the building.

“The reason why we chose these passport-type photographs was to have an image play on categorisation,” said Zimmerman. “People are always categorised and then fears and prejudices are much easier to be conveyed in the media.”

“A lot of people said, ‘I would never live there, it looks dirty, those net curtains, they must all be junkies.’ It wasn’t very positive.

“But there are ordinary families. People fell in love there, people have grown old in these buildings.”

The project has provoked debate about the estate’s past, present and future, allowing for a successful screening and discussion along the Regents Canal during this year’s Shoreditch Festival.

The hard work of the residents and Fugitive Images is vulnerable to the inevitable changes throughout the regeneration process. Zimmerman, along with her fellow residents and those present at the screening, will strive to retain the new atmosphere in the estate as it is redeveloped: “Hopefully we’ll keep some of the spirit we have now.”