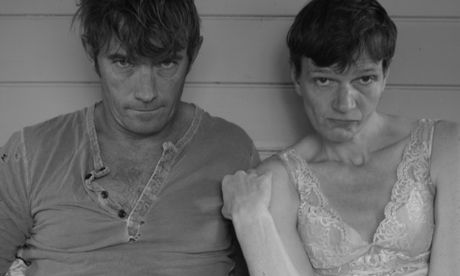 South African playwright Reza de Wet’s works are rarely staged outside of her homeland, which makes a new production of her multi-award winning work African Gothic a rather noteworthy event.  A newly-formed company called the Barebones Project, along with first–time director Naomi Wirthner, is bringing the play to the Arcola Theatre in Dalston, after a successful run at several site-specific venues, including the cellar of a pet food store, a building site in Soho, and, most recently, the Brighton Festival Fringe.

Originally written in Afrikaans, African Gothic is a psychological thriller set in an isolated, rural farmhouse, which follows the lives of a feral brother and sister, who, orphaned at a young age, have grown up without parental supervision. A lawyer threatens to evict the pair from their dilapidated property, and the narrative develops to reveal several shocking truths about the nature of the siblings’ relationship and the death of their parents. The play is abound with dramatic twists and turns as it takes an often darkly comic look at the legacy of oppression, and the connections between liberation and freedom.

The Barebones Project began last summer in the village of Forest Row in East Sussex, when a group of ex-actors and performers who, for various reasons, had not worked professionally in a while, decided to come together and put on a play. As their name implies, the company are committed to creating what they describe as poor theatre, in which the “sets, props and lighting are minimal and are recycled, salvaged and borrowed”. The group’s ethos has partly developed due to economic necessity, but also represents a deliberate aesthetic choice, as they aim to reveal the ‘bare bones’ of the theatre experience by removing the obstacles between the actor and the audience.

Naomi Wirthner, who left London some 18 years ago, makes her return to the capital with the Barebones Project, taking on the positions of actor and director – a rare occurrence in theatre. In a cast of four, she plays the role of the black housekeeper Alina, and explains she became the director by default. “Alina watches the action all the way through”, she says, “so it made sense that I should be the director”.

Having been an actress for five years, Wirthner found the transition to directing a challenge. “My partner is an actor so I’ve directed him in the bedroom,” she jokes, but adds that he returned the favour by giving her feedback on her own performance. “I would miraculously stop rehearsing when it came to my part”, she explains, highlighting the logistical strains of undertaking the dual responsibilities.

Although African Gothic deals with some specifically South Africans concerns, Wirthner sees the play as having global significance. “What’s amazing about her (De Wet)”, she says, “is that she doesn’t write overtly political plays”.  Rather, Wirthner claims, De Wet writes plays which focus on the struggles of specific individuals, whilst making a larger, universal, point. She sees parallels between the central theme of African Gothic and Barack Obama’s recent rise to power. “When Barack says, ‘Yes We Can’, he can’t do it on his own”, Wirthner says, adding: “within us all we recognise that we are longing for something to change”.

There are select members of the cast and crew on hand to help contextualise the play for a British audience. One of the actors, Gary Wright, attended Rhodes University in South Africa with Reza de Wet, and brought the play to the company. Gary’s partner, who works on the production, is also South African, and Wirthner claims that the couple bring a kind of knowledge with them, as they imbue the play with their personal experiences, and help accentuate the political arguments.

As well as the political challenges it presents, African Gothic features a provoking and often disturbing plot.  The siblings’ relationship borders on incest, and the play’s climax is particularly violent. In addressing audiences’ attitude to these phenomena, Wirthner elaborates on the incestuous relationship at the centre of the play. “We [the audience] are asked to collude with their incest”, she says. “There are moments when you collude with them and moments when you are appalled by your collusion”.

Nothing about De Wet’s landmark script is designed to provide comfortable light entertainment, and thus the Barebones Project, with its commitment to staging stimulating theatre, is well matched to this piece of writing. With the benefit of having had a successful and lengthy run in other venues around the country, this production comes to the Arcola promising to breath life into a somewhat neglected African play whilst reviving the careers of a multi-talented cast and crew.

The production has one other Hackney connection. Jane Gwilliams, one of the cast members, is a local returning to acting after bringing up her five children.