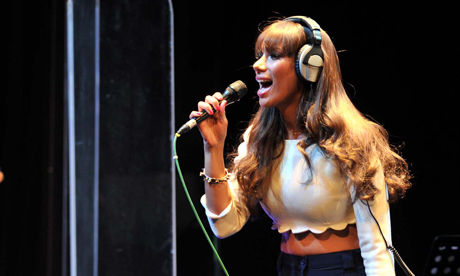 Following BBC Radio 1’s announcement of its Hackney Weekend 2012 festival today, the Hackney Citizen caught up with Leona Lewis to talk about her role as ambassador and her forthcoming album.

Lewis is one of four ambassadors chosen to champion the festival between now and next June. She is enthusiastic about her new role, engaging with young people.

Having been involved in many music, dance and drama groups while growing up in Hackney, she is well aware that the area is “very creative”, and she is looking forward to encouraging young local talent.

By no means is this sort of work new to Lewis, who already has an impressive track-record of involvement in the borough, with an organisation for children with special needs run by her aunt, as well with one for young helpers, for girls who care for their parents.

Though she admits that she was not particularly sporty when young: “I tried to run but that didn’t happen with me”, Lewis is now a keen horsewoman. She is particularly looking forward to the equestrian events at the 2012 Games, including dressage and jumping.

Asked whether she will perform at the opening or closing ceremony of the Games, she is coy, but concedes she “might be involved in some way”.

Meanwhile, she will be putting together her new album, to be released in later this year.

Lewis reminded the Citizen how Bowie and Björk are major influences. “Bowie: since I was younger, seeing him in The Labyrinth, I actually based my tour on that film and named it after it.

“I’ve just been obsessed with him ever since. He is an amazing song-writer, he’s so different, he puts such different sounds together. Bjork: the same thing. Things you wouldn’t think of come out of her. She’s very inspiring.”

She says of her new work : “It is definitely more progressive, it’s more eclectic. After being on my tour, my cousin, who is a producer, re-mixed a lot of my songs to be a bit more uptempo, a bit darker. I really wanted to take that into the next album.”

Leona Lewis shot to international fame following her outstanding performance in the 2006 series of popular television programme The X Factor. Her début single A Moment Like This soon became the fastest-selling UK single following its release in 2006. She has since released two albums, Spirit in 2007 and Echo in 2009.