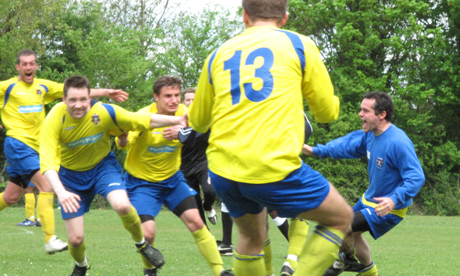 Sporting Hackney Football Club (SHFC) is set to celebrate 25 years of the football club. The anniversary event takes place on Saturday 14 May on Hackney Marshes.

The day will include football matches for all ages, a screening of the FA Cup final and the club’s annual awards. The centrepiece of the day will be a special announcement about the future of the club from Hackney Council and the City Academy.

The event starts with the Under 12s match at 10.45am, followed by Allstars vs Veterans and 1sts vs 2nds. The special announcement takes place at 1.30pm.

The FA Cup final will be screened in the council’s Hackney Marshes Centre.

Mike Bracken, Chairman of Sporting Hackney FC said: “For a community football club to thrive over such a long period is testament to the values and quality of the people associated with it.

“As an FA Charter club we are delighted to be able to play Middlesex County Football League games at the wonderful new facility at Hackney Marshes. This move, and the partnership with the City Academy, is a key part of our longer-term development plan to become an FA Development Club.”

Hackney Marshes has been called the spiritual home of Sunday league football, with over 70 matches played every weekend.

By next season Hackney Marshes will have 56 adult, one show, 12 mini and eight junior football pitches; three rugby pitches and five non-turf and three fine cricket pitches. This includes the re-introduction of six adult football pitches at Mabley Green.

The event is free to attend and everyone is welcome. Refreshments will be available. Places can be booked here or on 020 7515 5775.