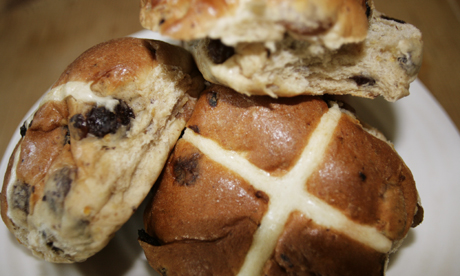 This article titled “How to cook perfect hot cross buns” was written by Felicity Cloake, for The Guardian on Thursday 21st April 2011 06.00 UTC

You know you’re getting old when you catch yourself tutting at the sight of hot cross buns on sale while most of Britain is still ploughing through Christmas cake. I can’t blame people for buying them – spiced, fruited breads are delicious at any time of year – but equally, I do regret the spreading of their brief season. My style is to hold out until Good Friday, and then cram as many as possible into my diet until they disappear from the shelves (or, at least, from the promotional hotspots and back into the muffin and teabread aisle). This year, of course, I’ve had to climb down from my high horse and eat more than is strictly wise during Lent in pursuit of perfection; that’s professionalism for you.

The rich history of hot cross buns is, regrettably, not our concern here (Oliver Thring gave the topic due consideration earlier this week) but if you think of them as the pancake’s opposite number, one using up the fats and sugars of the household, and the other reintroducing them to the diet in a celebratory riot of fruit and spice, then you’ll get the general idea. As Laura Mason points out in the Oxford Companion to Food (and you’ve got to love an encyclopedia that devotes a page to buns), they’re made from a "rich yeast dough [of] flour, milk, sugar, butter, eggs, currants and spices". What, frankly, is not to like about that lot?

The first recipe that I try, of course, contains no currants at all. Dorothy Hartley’s glorious survey, Food in England, published in 1954, claims that the formula for "London buns", the finger-shaped, white iced confections churned out by traditionally-minded bakeries, would once have been adapted for Good Friday, "with yellow candied peel substituted for the currants, and beaten eggs added to the dough, so that the buns were hot and golden under the cross. ‘Spice’ and ‘the cross’ are important things in all hot cross buns," she concludes.

She gives an old recipe, richer than contemporary in her day, using lard rather than butter, and warm water rather than milk – I replace a little of this with beaten egg, as instructed, for my Easter take on the things. Leiths Baking Bible informs me that rubbing the fat into the flour before adding any liquid, as in this recipe, rather than melting it, inhibits gluten development and gives the finished bread a softer, finer texture.

The "soft batter" as Hartley describes it, is slacker than other recipes I try, but rises magnificently after 2 hours in a warm place, and the buns themselves are indeed beautifully light and fluffy. I miss the currants though – whatever the history, the buns just aren’t the same without them.

Nigella’s recipe is more what I’d expect from a hot cross bun, combining a rich mix of butter, milk and egg with flour and yeast, and then folding through spices, mixed dried fruit and strong flour. Food like this should be her forte, frankly (although I’m surprised she hasn’t tried to sneak chocolate in there somewhere).

It’s nicely flavoured stuff: denser than the lard version, but pleasantly soft and moist, although I question Nigella’s decision to restrict the sugar to the glaze: to my taste, the buns themselves could do with a little sweet and salty seasoning to stand up to the intensely flavoured dried fruit.

Digging around online, I happen upon a recipe for buns using what is known as a "pre-ferment" – a pre-prepared yeast "starter" which is thought to give the finished bread "greater complexities of flavour" as Wikipedia has it.

To make my "sponge", as this sort of starter is known, I mix together yeast and sugar with warm milk and a fifth of the flour and leave it in a warm place to mature until it has tripled in size. Meanwhile I combine butter and the rest of the flour, and stir in egg, sugar and spices until it comes together into a dryish mixture – at which point I add my quietly bubbling sponge, and a little water, until I have "a very soft dough".

It ferments for an hour, and before I divide and shape it into buns, which are then left to prove for half an hour before baking. They’re nice enough, but with all that artisan effort, I’m slightly disappointed by the flavour – they don’t taste much more interesting than Nigella’s.

Nigella proves the dough overnight in the fridge before baking, which she reckons gives the buns "a better taste and texture" – a claim which, of course, I’m duty bound to test. So I cook one batch after an hour and a half on top of the boiler, and the other the next day after 12 hours in the fridge, having given the dough time to come back up to room temperature.

To be completely honest, I can’t detect much of a difference: the overnight proven dough might be slightly lighter, but then instinct suggested to me that the first batch might have benefited from another 45 minutes or so before shaping, which might well have ironed even that minor divergence out.

Dan Lepard, who never disappoints, has a recipe for "spiced stout hot cross buns", which he describes as, "like traditional buns but better". I make another starter, but this time using a can of my beloved milk stout (see also, beef stew) along with the yeast and flour, and leave it overnight.

When I uncover it the next morning, it billows alarmingly at me, so I get my revenge by mixing it with eggs, butter, flour, sugar and spices, which calms it down momentarily, although after another hour, it’s resurgent and ready for shaping. The baked buns are dark and malty – delicious, but, it must be said, not the traditional article I’m after. There’s just not enough contrast between the bread and the fruit to be a hot cross bun.

Nigella infuses the milk and melted butter with cardamom, cloves and orange zest before adding it to the flour and yeast, confessing, "I have gone rather cardamom-mad recently, but this short, aromatic infusion gives a heavenly scent to the little fruited buns later." I like the idea, but, despite crushing the pods, I can’t really detect it. More needed perhaps – in fact, perhaps commercially made versions have spoilt my palate, but I feel all of them could do with a bit more in the way of spice.

Dan Lepard gives me the option to substitute the candied peel for finely chopped apricot, which I try, but I prefer the traditional option; the jammy, citrussy element goes better with the spices and soaking the fruit in tea, as Dan recommends, makes for an unnervingly juicy result. Some American recipes suggest piping the cross on in icing, or "cream cheese frosting", but that seems akin to covering them in hundreds and thousands: the all-important Easter symbol should be in plain, muscular dough, preferably with a pinch of salt to contrast with the sweetness of the fruited bread.

Hot cross buns are a festive food, rather than a common or garden breadstuff, and they deserve to be treated as such. A rich, golden dough, heavy with spice and sweet with dried fruits and sugar makes them the kind of thing you really shouldn’t eat all year round – which is exactly as it should be.

1. Heat 200ml milk gently in a pan along with the cardamom, cinnamon, cloves, nutmeg and saffron until just boiling, and then turn off the heat and leave to infuse for 1 hour. Bring back up to blood temperature and then mix the strained milk with the yeast and 1 tsp sugar.

2. Tip the flour into a large mixing bowl and grate over the butter. Rub in with your fingertips, or in a food mixer, until well mixed, and then add the rest of the sugar and the salt and ginger. Beat together 2 of the eggs.

3. Make a well in the middle, and add the beaten eggs and the yeast mixture. Stir in, adding enough milk to make a soft dough – it shouldn’t look at all dry or tough. Knead for 10 minutes until smooth and elastic, then lightly grease another bowl, and put the dough into it. Cover and leave in a warm place until it has doubled in size – this will probably take a couple of hours.

4. Tip it out on to a lightly greased work surface and knead for a minute or so, then flatten it out and scatter over the fruit and peel. Knead again to spread the fruit around evenly, then divide into 16 equal pieces and roll these into bun shapes. Put on lined baking trays and score a cross into the top of each, then cover and put in a warm place to prove until doubled in size.

5. Pre-heat the oven to 200C and beat together the last egg with a little milk. Mix the plain flour with a pinch of salt and enough cold water to make a stiff paste. Paint the top of each bun with egg wash, and then, using a piping bag or teaspoon, draw a thick cross on the top of each. Put into the oven and bake for about 25 minutes until golden.

6. Meanwhile, mix 1 tbsp caster sugar with 1 tbsp boiling water. When the buns come out of the oven, brush them with this before transferring to a rack to cool. Eat with lots of butter.

Are hot cross buns what they used to be, or has our year-round greed taken the shine off them? Which modern additions do you approve of (please, no cranberries, we’re British!), and what do you eat them with? (To start the ball rolling, I’ll offer black pepper Boursin – an inspired topping idea from my friend Sharon.)