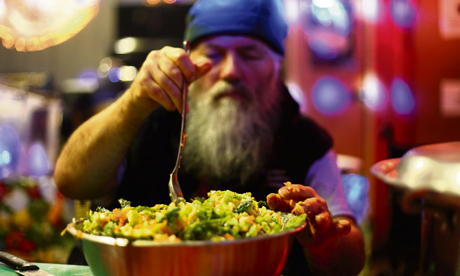 A regular enjoys a meal at the People's Kitchen at Passing Clouds, Dalston. Photo: Samar Hazboun

A pile of potatoes, some parsnips, ten onions, kale and something called a Jerusalem artichoke.

That sounds like the beginning of a recipe, but one that has yet to be written – unless you were at the People’s Kitchen at Passing Clouds last week.

The People’s Kitchen is a way of solving the wasted food problem which on a global scale of billions of pounds a year. The goal of the Kitchen is too put some of that food (at least Hackney’s share of it) to good use. It is mostly fruits and vegetables that weren’t sold over the weekend but that must go in order to make room for new inventory. If it weren’t for the Kitchen this food would just be thrown away. Instead it gets prepared by volunteers and eaten by the public.

Some of the bigger shopping chains require that you arrive in a refrigerated truck to pick up waste food, thereby making it impossible for those collecting the food (who set out on foot) to comply, so they rely on the smaller shops in the area (but they are always looking for fresh donations).

Steve Wilson, one of the principle organisers, is a food professional and has enough equipment to transform these raw abandoned ingredients into a sumptuous feast that could easily rival Planet Organic. Some of the equipment was purchased using a grant from the Awesome Foundation, who absolutely loved the idea when Steve pitched it. There are giant pots, several stoves, two food processors and even a food dehydrator! Now the Kitchen at times has more volunteers and utensils than it does food.

Historically, some of the best dishes come from the ingredients that no one wants. Peasants in Europe used to glean the fields of landowners to collect these ‘outsider ingredients’. In Italy such poverty led to the creation of la cucina povera, which means ‘the cooking of the poor’. Cucina Povera has resurfaced in the media and is now a trendy movement that engenders a philosophy not unlike that of Slow Food or the Simplicity Collective. The concept is that you try to make do with what you have, and transform simple ingredients into dishes that are more than the sum of their parts.

The volunteers at the People’s Kitchen are also more than the sum of their parts. Having participated twice, I can say that I only saw a few of the same people and the others were from all over the world!

The preparation starts at 14:00, and after hours of peeling, boiling, chopping and stirring, the food is ready, usually about 6:30ish. This is when the people start to arrive and queue. The cooking tables are transformed into dining tables and everyone takes a seat. Upstairs there are sofas and a bar in case you really want to eat like a Roman.

There is so much positive energy at the Kitchen that I can’t help but subscribe to the Hare Krishna belief that love can be transferred between individuals via food. I have to admit that after one plate of those delicious creations I wasn’t hungry until the next day. That is not to say that it was heavy – it was actually all vegetarian – simply nutritious and satisfying. Especially when you’ve worked so hard to create it and get to see all your new acquaintances enjoying themselves for free.