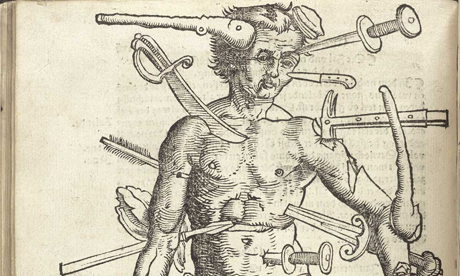 First-time flyers from Stoke Newington’s International Airport may initially find the main terminal difficult to find. It’s tucked away at Leswin Place, just off the High Street, beyond a suspended spider-like iron mobile sculpture and a baggage reclaim sign (the sign itself seemingly reclaimed from a rival airport).

This week, the art space hosts a reprisal of director, writer and performer Chris Goode’s one-man 2009 show The Adventures of Wound Man and Shirley. It is a play about an emotionally isolated 14-year-old boy’s chance befriending of a superhero, described by Goode in the introduction as “Bill Murray crossed with a Swiss Army knife”.

Wound Man, who, oddly, I too remember from a Year 9 history textbook, is the magical realisation of an illustration from a fifteenth-century guide to battlefield surgery.  His superpower is to act as an emotional soundboard to the pain of those he encounters. A power compromised and yet made possible by the myriad arrowheads and daggers protruding from his body.

This gives an idea of the frequently hilarious surrealism enveloping a play about the raw heartache of adolescence. There are genuine moments of tenderness and incredibly measured pathos. And then there are cartoon animal stampedes, sentimentality-shattering pratfalls and Radiohead-themed restaurants called ‘OK Potato’.

But it would be false to suggest these imaginative quirks take anything away from all the shades of very personal and gentle observation. Somehow, Goode’s writing and production override the limitations of a hastily improvised set rendition of a teenage bedroom, building interior monologue with well-chosen music and the constellation of domestic items peppering Shirley’s suburban trammel.

For example, the image of the glow-in-the-dark stickers above Shirley’s bed, which “don’t glow like the pack says” poignantly captures that small point between childhood and the trauma of leaving that figurative and emotional space behind.

Here in the makeshift airport, fortunately, Chris Goode is able to illuminate this in a wonderful piece of theatre.