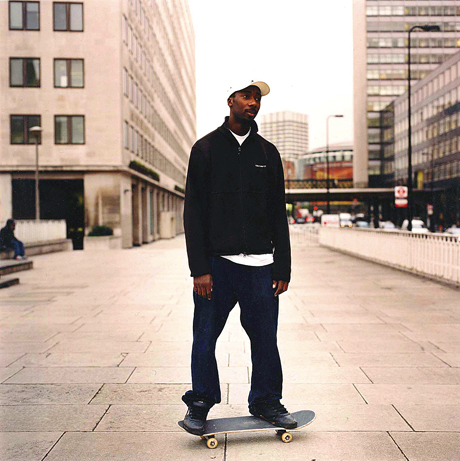 “It’s not just about skateboarding – it’s about getting into something that you enjoy doing.” Photo: Barnaby Sweet

Winstan Whitter is standing in the Hackney Museum taking photographs. Wrapped up in a coat and scarf against the cold outside that has covered the Town Hall in a thin lace of snow, the 36-year-old filmmaker and his ten -month-old daughter Frida Rose cut a stark contrast to the red, green and gold glow of the museum’s Reggae Rebels exhibition.

“I helped put this exhibition together,” he explains, tucking his camera into the buggy. “That’s my film showing there and I helped them get some of this stuff.” He points to an impressive collection of old turntables and speakers. Reggae Rebels – a history of the local reggae and blues scene – is an area close to Whitter’s heart and the subject of his 2008 film Legacy in the Dust about Dalston’s Four Aces club, where his father worked as a chef and DJ.

“A lot of what I do relates to my experience and history and my quest to learn more about where I live,” he says.

Winstan was born in Ghana and raised in Stamford Hill, and it is this working ‘quest’ that has led to such a range and depth of work – from a documentary on herbal doctors in Ghana, to campaign films to protect skateboarding on the Southbank, to a  new project on the history of the fire brigade and music videos for artists such as Dizzee Rascal.

What draws him to a subject? “I try to be as diverse as I can in terms of the types of projects and films I work on. I’m interested in all types of stories. It’s all about the story. If it’s a good story it’s all about honouring that story and making it into a good film.”

When filming Legacy in the Dust, he became involved in the fight to save the old Dalston Theatre, which was demolished as part of the East London Line regeneration. His documentary Save our Heritage is a homage to the work of local campaigners: “Although we didn’t actually save the buildings, it inspired other organisations around the country to save their heritage. People realised we need organisations like [campaign group] Open Dalston to get solicitors on the case and put the information out there so more people are aware.”

His latest documentary, Hands Off – about people working in Hackney’s strip clubs – was a response to the Council’s controversial proposal to ban all sex establishments in the area. Film, he argues, is a better way of consulting people on these issues: “Using film, you get through the honesty of the people involved in the subject and the situation.  You can open things up for discussion. Because you can use the internet to reach so many people so quickly it just seems a better way to do it, rather than sending paperwork through someone’s letterbox, which most people don’t look at because they think it’s junk mail.”

Whitter speaks with an almost tender fondness about the Hackney he remembers growing up: “I guess there were some things that had to go,” he says thoughtfully, recalling the infamous ‘front line’ of conflict between drug dealers and the police on Sandringham Road. But, he says, the ‘clean up’ has changed the character of the area: “A lot of the culture of Hackney has disappeared…There were a lot more West Indian and Indian people in the area, there are many fewer now. I think because it’s got so expensive.”

“The area’s changing, it’s evolving and it’s becoming much more a place of media and creative businesses, whereas back in the day it was more music-based and much more community-based.

“I remember Dalston especially, there was always music being blared out the window – it was so lively, it kind of had a carnival atmosphere to it. I feel like a lot of that has gone.”

A professional skateborder turned film-maker, Whitter first made a name for himself in 2005 with Rollin’ Through the Decades – a documentary about the history of British skateboarding. Recording tricks and competitions on handheld video cameras inspired him to turn to film-making professionally: “Skateboarding was the roots for everything for me,” he says, “It taught me how to stand on my own two feet and become independent – metaphorically speaking and physically at the same time. I guess I’ve applied that to lots of other things. I feel the same way about filming.”

I ask if skateboarding kept him out of trouble. He nods defiantly: “I remember one day I was out with some kids from Stamford Hill and they stole a handbag. I thought ‘this isn’t for me, what am I doing here?’”

“So I had to separate myself. Luckily because I was skateboarding, I had that to do. It consumed me. Before I knew it, they were in jail for four or five years because they’d excelled at what they were doing – at stealing stuff.

“That’s why I made Rolling Through the Decades. Because I wanted to inspire youngsters. It’s not just about skateboarding – it’s about getting into something that you enjoy doing.”

Does he see himself as an inspiration to young people? “I guess I do. I guess in a way I tried to show what’s possible with not much. You don’t need to be affiliated with a big TV production company to have a good idea and go out and make it.
“There are not many people from the West Indian African community involved in films in the levels I’ve been involved in, so for people from a similar cultural background I guess it’s inspiring”.

Whitter’s daughter has started to get restless.  He gets up and shadows her tottering steps around the room, playing and laughing, but still managing to speak with eloquence and passion. Has becoming a father changed his outlook?

“For me I’ve always wanted to inspire and influence people and that’s something I’m doing with my daughter Frida Rose. It’s made me realise that all the little things you do, you are being watched. Not just by your kids but all the people around you and other children. It’s an example we need to set.”