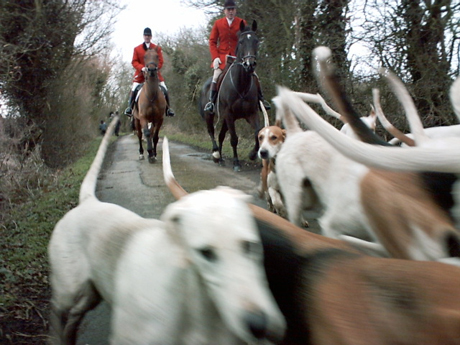 The first of November saw the beginning of the fox hunting season all across the UK.  Some 176 fox hunts in England and Wales saddled up on Saturday 6 November to celebrate the first full hunt of the season, donning smart red  coats, drinking port  and catching up with old friends.

However, for some local Hackney residents the beginning of the fox hunting season is no reason to celebrate. After years of campaigning by Labour MPs and animal rights groups, hunting with dogs was finally banned in 2004 for cruelty reasons.  However, according to local resident Shirley White, hunts systematically break the law on a weekly basis.

Shirley is a member of a local group based in Hackney which is dedicated to monitoring  fox hunts in Essex,  Suffolk, Norfolk and Hertfordshire.  The voluntary group known as North and East London Hunt Sabs (NELS) has been established for 18 years and is part of the national Hunt Saboteurs Association.  Daniel  Parker, a longstanding member of the group, claims: “Fox hunting is an extremely savage and unnecessary activity. The majority of public don’t agree with fox hunting, but the police never reprimand the hunt for breaking the law.”

Armed with maps, compasses, citronella spray (to mask foxes’ scent) GPS and cameras, the Hackney hunt saboteurs leave the busy city, early every Saturday morning, in a beaten up,  twenty-year-old  land rover and  head out to greener pastures.

“The aim of the game is to keep on top of the hunt”, says Shirley White, “that way you are ready to intervene in case they pick up a fox, you can always keep a watchful camera on them as well.  They hate cameras.”

Fox hunts and hunt saboteurs go hand in hand.  Hunt sabotage has been around since 1964 and any established hunt would not be complete without its own set of “antis”.  Both sides go out in all weather come rain or shine.

“Although utterly exhausting”, says Daniel Parker, “it’s a really rewarding day out.  You know that if you weren’t there the hunt could have killed up to five innocent foxes that day.”

The Conservative party adamantly opposed the 2004 hunting ban, and in their recent election manifesto they  said they would give a free vote to MPs to bring back fox hunting. Shirley White says: “If the hunting ban were repealed society would be regressing.  There is no need for such needless killing in the name of fun.”

The debate goes on. So the next time you are in a pub and someone dressed in tatty old combats comes in muddy, wet and tired, buy them a pint, because it’s likely they’ve been out running around the countryside trying to save our bushy-tailed furry friends.

← Rugby ladies on the riseVictoria Park: a history →