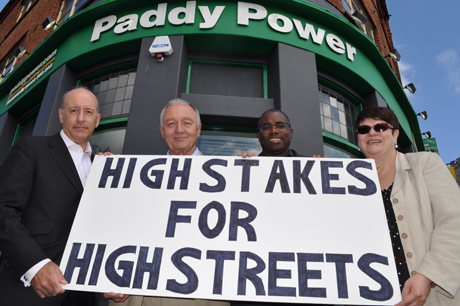 Ken Livingstone visited Mare Street today calling for greater powers for local councils to oppose the opening of new betting shops. Mare Street alone has nine betting shops, whilst Hackney is home to a total 70 such establishments, one of the highest number of any borough in the capital.

“Local councils should be able to have a say in what’s on offer on their local high street,” said Mr Livingstone in front of the old Railway Tavern pub, which is being turned into a Paddy Power bookmakers.

Since the previous government’s Gambling Act of 2005 relaxed licensing laws, betting shops have sprung up all over the capital. There are now around 400 more betting shops in London that there were 10 years ago.

Mayor of Hackney Jules Pipe said: “Administrative problems are being exploited by the big bookmaker chains, who keep opening more and more of these shops.”

“We need to implement laws similar to the special policy area we have for pubs and clubs in Shoreditch, so that no further applications can be approved. We want the powers to be able to stop this,” said Mayor Pipe.

Ken Livingstone, who has thrown his hat into the ring for the Labour candidacy in the 2012 London mayoral election, said: “I’d like to work with the London boroughs to give them much more widespread powers to make sure their local highstreets reflect the needs of local communities.”