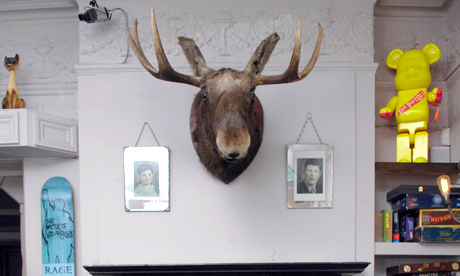 Far from the madding crowds of Shoreditch, nestled on the corner of an unassuming road in Homerton, Hackney’s freshest ale house is attracting citizens from far and wide. Just ask the moose on the wall.

You may well have never heard of this place but the Kenton, on Kenton Road, recently scooped the London region prize for Best Newcomer in the Great British Pub Awards. In addition, it won an Admiral Taverns achievement award in recognition of the positive impact made on the pub and the community. The driving force behind this phoenix from the ashes is landlord Egil Johansen, who worked for years on the tourist board for his native Norway before taking over the pub’s lease in March 2009.

Anyone who visited the pub in its former guise of the run-down Kenton Arms will know how much of a revolution has taken place. Egil, who pumped in a lot of his own money, ripped apart the drab furnishings and in place of the dartboard, gloomy lighting and rickety bar stools, there are movie projectors, wall mounted candles and wing-backed armchairs.

The Kenton is not exactly sprawling, but the space is used to great effect. There are a few big tables to cater for the Sunday roast masses and group banter but also many nooks and crannies for a more intimate liaison. The ‘Deer Garden’ is sizeable, replete with plants and flowers and graffiti tributes to beer-wielding Norse gods. The garage has also been converted to provide an under cover (no smoking) garden extension. The giant moose head that casts a watchful gaze over the clientele was supposedly shot by Egil’s grandfather in the seventies. To know the full story, try asking the man himself; he spins the records at the weekends. With the film posters, colourful trinkets and a hint of Northern tundra, the décor resembles a jumble sale held in a Scandinavian cinema. Speaking of jumble sales, they have one every Thursday and ladies get to gorge on cupcakes and swill cheap cocktails.

One may unwittingly stumble upon one of the many events that the Kenton holds throughout the week and this is the pub’s best asset. Films are screened for free, live bands turn up, scrabble tournaments are fought and there is the obligatory pub quiz. Beyond this though, there is a general air of inclusiveness; you feel that anyone from the area would be comfortable here. Local artists are invited to exhibit their work on the walls, pensioners get their own happy hour every weekday, and I even saw a poster for a lost cat.

The culinary fare is refreshingly against the grain of the more flowery gastro-pubs, there is instead an honest range of pie ‘n’ mash at £8.50 a pop. The pies, from Pieminster, are small but bursting with rich flavours – free range beef and aged stilton swim in red wine gravy, while vegetarians can chew on wild mushroom and asparagus – and all are served with mushy peas.

Friendly and attentive staff man the taps, of which there are a healthy eleven, pumping out reasonablypriced lagers, Guinness, cider and two real ales. The wine list is robust and the descriptions avoid pompousness (the Cabernet Sauvignon is ‘like adult Ribena’). Cocktail aficionados are catered for and for those that don’t heed the warning not to ‘mess with the landlord from the North’, they can try drinking Viking’s Blood – potently dosed with ‘Norwegian water of life’.

There is always an inherent risk when transforming a local; to some it can be an act of cultural genocide (where do all the former punters go?), but the Kenton has managed to shed its shady image yet still retain its role as a community hub. There has been a lot of effort made not just on the décor and service, but towards including the people in the look and feel of the place. The location does not attract much passing trade but it is a welcome addition to an area deprived of decent boozers. So, for those wishing to repose in an attractive, friendly neighbourhood pub, grab your horned hats and rampage towards Egil’s place.