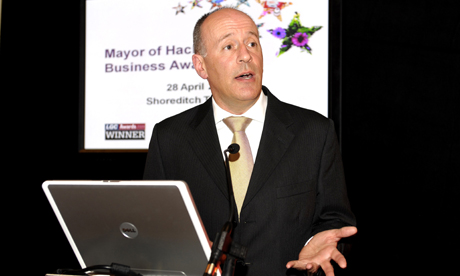 Could it be magic? The Mayor presenting the business awards last year. Photo: Hackney Council

As mysteries go, it may not be as glamorous as those penned by Agatha Christie or Patricia Highsmith. But the prosaic-sounding Mayor of Hackney’s Business Awards 2010 have nonetheless delivered a trio of baffling questions that are calling out to be investigated by some Hackney Sherlock.

The awards initiative, an annual affair that has been going for five years, will this year culminate in a reception due to be held this month (September).

According to the Council, the accolades are “dedicated to recognising and celebrating the excellence and diversity of business in the borough”. But now some seasoned observers of the Town Hall and former award winners are privately wondering whether “and mystifying people” might justifiably be added to that list of high-minded intentions.

Mystery Number One: A category for the 2010 awards – the “Best Disabled” category – has gone missing. It appeared in the literature the Council released to applicants but had managed to inexplicably vanish by the time the winners were announced this month.

The Citizen asked the Council for an explanation of this baffling disappearance. We received a reply telling us that there had not been enough nominations for a shortlist to be drawn up for this category. But this only serves to provoke another question: Why, in a borough the size of Hackney (which has a fair few businesses accommodating the needs of disabled consumers and employees), were there not enough nominations?

Mystery Two: Even among those categories that did attract entrants, some attracted so few that any business that could be bothered to throw its hat into the ring had a 50/50 chance of being shortlisted (the daftly titled “Best in the Business” category, for example, drew a paltry six entries, of which three were shortlisted). Why the apparent dearth of interest?

The Third and Final Mystery: For a council that makes a big song and dance about “diversity”, it seems strange that the “Best Ethnic Minority” and “Best Women’s Business” categories, which were on the slate in previous years, were not included this time around. Asked to comment on this, a Council spokesperson said: “In light of feedback from local businesses who had told us that they felt many of the categories were not relevant to them…we changed the categories”.

Apparently this led to an increase in the number of entries received this year, although one wonders whether more imagination by those involved in promoting the awards might have resulted in a similar increase without the need to make cuts.

Step forward, please, anyone who can offer a solution to these riddles.