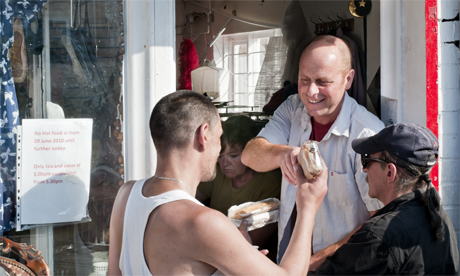 Rough sleepers in Hackney could double in number by the end of the year, according to the founder of a homeless charity.

Hardline measures in last week’s emergency budget – with housing benefit set to be cut by up to 40 per cent and parents facing the possibility of eviction from council homes once their children move out – will force many more people on to the streets, said Andrew Faris.

He runs the Rhythms of Life International charity, which gives out food to homeless people every night in Dalston – and is facing eviction itself after its rent was doubled.

The charity has already seen a significant rise in homeless people after the recession led to companies closing and rising unemployment.

Mr Faris said: “It’s a serious problem. I think people underestimate the level of homelessness in the area. “We have seen a 10-15 per cent increase in people coming to us in the past year. We have 40 to 50 people a night coming now and that could double by the end of the year.”

The charity’s home includes offices and a charity shop in Crossway – and a yard where it serves food to homeless people. But after the rent hike it could lose its Crossway base by the end of the summer and is desperately looking for new premises before winter weather begins to take hold.

Mr Faris, who was homeless himself several years ago before setting up Rhythms of Life in 2008 said he had asked Hackney Council to help the charity to find bigger premises – but received no assistance.

A Hackney Council spokesman said: “The council is aware of the needs of Rhythms of Life and has met with them to help resolve this matter, and will be doing so again shortly. There are only a handful of council properties that meet their requirements though, and unfortunately there are none available at present.”

The rough sleepers who are given food – hot meals in the winter and sandwiches donated by Pret a Manger, Eat and Greggs, in summer – would benefit from larger accommodation for the charity, Mr Faris said.

He added: “We are desperately looking for premises so we can help people more with advice and give them with one-to-one attention.

“Our current premises are in a yard, they are not suitable. We need a proper space to sit in and talk to clients.”

Mr Faris said the charity would be able to do one of the many derelict buildings in Hackney – and pay running costs – if it meant they could have a new home.

He was speaking at an event at which BBC Gardeners’ World presenter and Joe Swift helped Rhythms of Life volunteers give out food in Dalston.

Hackney resident Mr Swift said: “It’s phenomenal what they do here, and a much-needed service. A lot of people would be lost without it.”

Rhythms of Life is looking for people to join its team of volunteers who provide food, and a listening ear, to the homeless people who benefit from its 365-days-a-year service.

Former rough sleeper Richard, and Farid Mohamed, who is currently homeless, are among many who have benefited from food, advice and companionship at Rhythms of Life International.

Richard, 40, came to London a year ago from Liverpool – and had been living in hostels and on the streets until three weeks ago, when he found a shared flat.

A former heroin addict, Richard is now off drugs and looking to rebuild his life. He said the help he had received from the charity was invaluable.

Richard said, “It’s brilliant here – if it wasn’t for places like this, none of us would eat. It has given me direction and my next plan is to find a job.”

Farid, 40, who is on the streets after work dried up – he has previously been a street sweeper and had kitchen jobs – was unable to afford the service charge at his hostel and send money home to his wife in Djibouti.

He said work was becoming increasingly difficult to find – but was confident he would find a job. Farid, who has been in London for 20 years, said: “I’m going to get something somehow. Right now it’s not happening but usually something comes along. But getting by would be really difficult without this place.”

Rhythms of Life founder Andrew Faris said Richard and Farid were among many homeless people whose lives the charity had improved.

“If we can help them ourselves, we do, and if there is a homeless unit we can ring up, for example, we do that. With Richard, we were able to give him not just food but advice and friendship.”