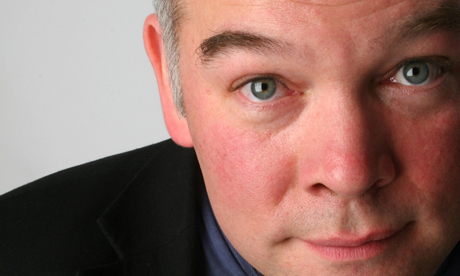 On Saturday afternoon, renowned stand-up comic and Stoke Newington resident Stewart Lee read from the work of Arthur Machen, one of the founding fathers of horror fiction, as part of the inaugural Stoke Newington Literary Festival.

The sell-out event saw over a hundred people packed into the appropriately dark and mysterious surroundings of Stoke Newington International Airport.

Stewart Lee discussed his personal fascination with this hugely influential gothic writer and psychogeographer, and recounted his own history of spooky occurrences in N16, such as finding initiation certificates for a Druidic cult in the attic of his new house.

He then read an abridged version of Machen’s spooky tale ‘N’, set in Stoke Newington, to a spellbound audience.

Appropriately, the steaming hot weather broke just as a key moment in the story was reached. As the protagonist sees a beautiful green park where there should be only streets of terraced houses, summer rain suddenly began to hammer on the roof … almost as if Machen were making himself known.

Saturday’s event coincides with the Library of Wales’s publication of new paperback editions of two of Machen’s best-loved works, The Great God Pan and The Hill of Dreams.

Gwilym Games, Editor of the Friends of Arthur Machen‘s magazine Machenalia said, “The new Library of Wales paperbacks make some of Machen’s best work easily accessible again in Britain. As a key London writer lauded by Peter Ackroyd and Iain Sinclair, anyone interested in the real mysteries behind everyday London life should read Machen’s work. Equally, Machen is part of a long tradition in Wales where his stories can be seen as part of a fantastic legacy stretching back to the tales of Arthurian legend.”

Born and brought up in the late 19th century in the Black Mountains of Monmouthshire, Machen’s tales of bohemian fin-de-siécle London were coloured by the dark and mysterious landscapes of his childhood.

The Great God Pan, his most famous story, was condemned on its first publication in 1894 as decadent and nightmarish. But its mixture of chilling horror and pagan sexuality with contemporary Victorian London, plus Machen’s distinctive and haunting writing style, soon brought him cult status.

H.P. Lovecraft was an early fan, while Stephen King recently described it as “one of the best horror stories ever written”.

Jessica Mordsley, the Library of Wales representative in London, said, “Saturday’s event was really memorable and atmospheric. It was the perfect place to introduce Machen to a new generation of readers.”