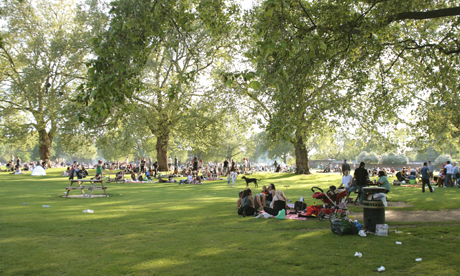 London Fields yesterday, the day after the shooting took place

China Mieville’s 2009 novel, The City and the City, focuses on two cities that inhabit the same physical space yet have little-to-no interaction with each other, ‘unseeing’ each other as they pass each other in the street and prevented by myriad and intricate laws to stop them from ‘breaching’.

I mention this for a two reasons. The first being that Mieville, a London writer, has obviously modelled at least part of this conceit on his hometown. The second being that he will be in attendance at the Stoke Newington Literary Festival in early June, the first in the area, and a definite sign of the rise and rise of certain parts of Hackney as interesting, ‘cool’, bohemian hang-outs.

Last Saturday (22 May 2010), in London Fields, on one of the hottest days of the summer a sunbather was shot after getting caught in a flare-up of gang violence. A perfect, if sad, example of the two co-existing worlds that occupy the same spaces in the borough meeting with tragic consequences.

A recent article [a comment piece by a local resident] in the Hackney Citizen has claimed:

“So the ‘kidz’ decided to remind us THEY ARE HERE! And who can blame them. Their parents are being defeated by generation upon generation of poverty, escaping from war zones, beaten by the system, drowning in smack, crack, alcohol, junk food and trash tv.  But their children have still got the anger of untapped potential burning in their hearts.  They protect what they do have, and what they have is territory. Where are the pubs, clubs, cafés, gyms and park equivalents for them?

“We expect them to stay hidden, keep their ugly poverty away from out rose-tinted Ray Bans.  It’s time we woke up, heard their cries for attention, listened to their anger and gave them something of their own.  Hackney is taking a deep breath.  This could be one long, hot summer, folks.”

It is very hard, as the writer seems to de doing, to defend any sort of gang activity and I would deeply question his assertion that whoever was responsible for this had any sort of agenda beyond whatever gang-squabble started the incident in the first place. It was not a cry of rage at the perceived gentrification of the area, but something that has a tragic, fatalistic inevitability to it. Follow the logic of what has happening socially in Hackney, and indeed across London, and something like his has to happen.

I have no interest in adopting a holier-than-thou, ‘I’m more working class than you’ attitude that criticises vocally the ‘trendies’, the gentrification and the coffee shops(but of course these are all the things that make places like London Fields and Stoke Newington appealing). I will vocally criticise Broadway Market, but that’s because it is too expensive and clearly aimed at a certain demographic that does exclude a massive amount of people who live nearby. This is an unfortunate fact, but even that does not make it ‘wrong’ (whatever that may mean).

As someone who works with a number of disadvantaged young men and boys in the area – and I have worked on the estates around London Fields – the obvious gap between rich and poor becomes very apparent, and it would be easy to indulge in some anti middle-class posturing, which I must admit I have been guilty of in the past. But this is too simple an answer. Nobody in their right mind is going to say that the improvements and facilities that are now a part of London Fields are a bad thing, and in theory they are there for everyone and anyone to use. Yet it is true that a lot of local young people can’t go there precisely because of gang activity – if it is perceived as ‘their turf’ then they fight over it.

It all comes to down to a question of attitude, and perspective. Gang violence is something I will never condone, but from the experiences I have had working with some young men in the area I do have a (limited) understanding of the issue, and have been able to put a human face on it. The social and cultural conditions that create these things are really not that hard to understand – poor housing, lack of education, a feeling of exclusion from mainstream society. Anyone with a modicum of intelligence could work that out. It doesn’t excuse any of it, but there is a reason for it, and it’s a reason that we have to get to grips with and understand. Not to fear, but to know. The gangs are real, but don’t believe what the papers tell you either. Maybe find out for yourself?

The problem with the middle-class makeover of Hackney is one of ‘unseeing’. I do believe that to maintain a certain lifestyle in areas of London such as this one, where so many different social groups and people from different social levels live side by side (and I literally mean side by side), then to accept the failings of where you live, and your own implication in that, will destroy the image of the life you want to live. If you try and buy a lifestyle, you better put on blinkers, look straight ahead and ignore the contradictory information flickering in the corners of your eyes.

Again, I am not criticising aspects of these lifestyles; I love living in Stoke Newington precisely because of some of the very same things that I find unpalatable – as a vegan, places like the Whole Foods Market are a godsend. But then I am aware that I’m a single man who has the luxury of choice. The place is too expensive. That is a simple fact. I’m excited by the upcoming Stoke Newington Literature Festival. Will there be some complete wankers there? Yes, of course. It doesn’t invalidate the thing itself.

So here we come to the issue of attitude and perspective. It’s possible – and I know this, because it’s how I and many friends live our lives – to enjoy all of the great things the area has to offer, without ignoring everything that is wrong with the place. You can’t buy an aspirational lifestyle and live here without ignoring those who don’t fit into that lifestyle. I believe that to be a fact. However, you can reconcile these issues within yourself and stop ignoring what’s happening. In fact, once that happens, you’ll most likely become part of a force that changes things for the better, for everyone. Naïve and idealistic, possibly, but it’s what I think.

And there are a lot of real problems, that a cup of overpriced coffee won’t solve. But then neither will my vegan pesto.

Note: the views expressed in comment pieces are not necessarily those of  Hackney Citizen.

The shooting at London Fields: the ‘kidz’ are here!

Letter: There is no ghetto of the rich in Hackney (Guardian, Tuesday 1 June 2010)

← The shooting at London Fields: the ‘kidz’ are here!London Fields shooting: Hackney police appeal for witnesses →