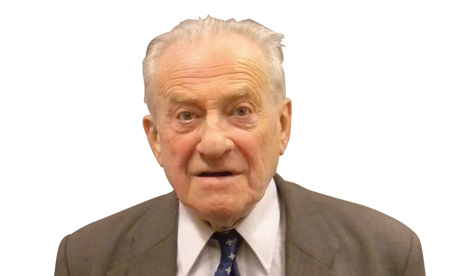 Monty Goldman is a well known Hackney personality, having lived and worked in the borough for over 70 years.

He has vigorously campaigned for a better deal for working people, tenants and pensioners since pre-war days and his work against fascism, racism and anti-Semitism is a matter of public record.

Monty served on the Council for Racial Equality for seven years.

He worked as an accountant for various local firms until his retirement and has been an active member of the GMB union for 60 years.

An active member of the pensioners movement, Monty is chairman of the Hackney Council for Older People and is a delegate to the Greater London Pensioners.

Put the interests of local working people, pensioners, young people and the unemployed before those of big business

Campaign against any further cuts, privatisations, marketisation, introduction or increase in charges for local public services.

4. Campaign to overturn the creation of academies and for a good local school for every child.

5. Campaign for a programme of investment to create jobs locally by investing in renewable energy, and resuscitating the local real economy.

6. Campaign for the introduction of proportional representation in local elections and the scrapping of an overpaid cabinet run council, and the directly elected mayor, to return and extend local democracy.

7. Only take an average workers wage in the borough and campaign to reform the expenses and wages of councillors.

8. Defend the NHS and oppose the privatisation and marketisation of health care.

10. Work in the broadest possible way to mobilise against the implementation of undemocratic EU diktats in Hackney.