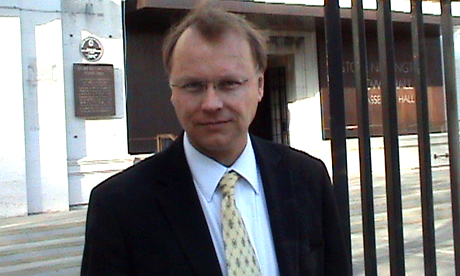 Adrian Gee-Turner lives in Stoke Newington, and is a former chair of Hackney Council’s Liberal Democrat group and the Overview and Scrutiny panel.

He was also the Lib-Dem spokesperson on the Local Government Democracy committee in Hackney.

Adrian is a long time trade unionist and has been an executive member of the Association of Liberal Democrat Trade Unionists. For the last eight years he has been the secretary of the London branch of Unite’s Professional Sales Association.

Adrian has previously contested parliamentary elections in 2001 and 2005.

1. Clean and open politics in Hackney

No more secrecy about your money: Liberal Democrat councillors will hold the council accountable for every action

We will publish all information that can be legally revealed, in clear text

No more £30,000 overseas jaunts for Labour members nor Hackney Council’s £10,000 stall at the national Labour conference – all paid for by you

2. The best policies for the environment

Stopping it before it starts – more funding for voluntary groups and mentors to target those most likely to offend, and greater roll out of initiatives that break the cycle of youth re-offending, such as Hackney Diamond

Cutting anti-social behaviour – effective council action, working with the police, to deal with the worst offenders

4. A fair start for young people

Developing more community-led sports and leisure opportunities – creating safe spaces for young people to meet, and keeping them off the streets

5. Fair taxes for all – and cutting taxes for local people

Nationally, we will scrap income tax for people earning less than £10,000

6. A fairer deal for tenants and leaseholders

Liberal Democrat councillors will listen to leaseholders and tenants through meaningful local residents’ groups that have real power, not just talking shops

No more exorbitant service charge increases for leaseholders, without the quality of service improving, and no ‘major works’ imposed upon leaseholders at way-above market costs and without proper consultation

The Labour Mayor’s salary and expenses have so far cost local people over a million pounds, including a recent pay rise despite the recession

8. A cycle scheme for Hackney

We will introduce a bike hire scheme in Hackney, for Hackney, run by the community

The Liberal  Democrats have always supported voluntary groups in our budgets as they provide best value for money services, use local expertise and builds local communities

We will provide more matched funding for community groups and work with the voluntary sector to create a future for Hackney, decided and delivered by Hackney residents

Fight to make sure Hackney gets its fair share of jobs

Support and develop grass-roots sports facilities for the long term – sport is not all about international competition, it is about local participation too

Note: this article was originally published 22 March 2010 and was then re-published 24 April 2010