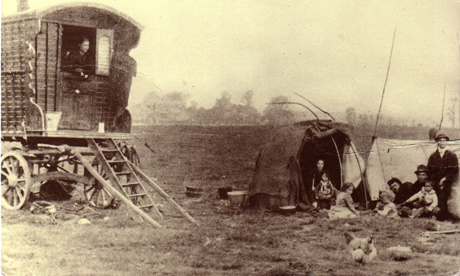 Romanies who settled on Hackney Marshes near the end of the 19th century Photo: Hackney Archives

The story of the Gypsies in England is little known even among the people themselves and certainly not to Londoners as they press on with their daily concerns. So it may surprise some readers to learn that Hackney has played a key part in the Romany narrative.

Historically, families of Irish Travellers had settled on the trailer site between London Fields and Mare Street that Hackney Council had provided to meet the provisions of the 1968 Caravan Sites Act.

The travellers were happy with the fifteen or so pitches for their caravans and mobile homes. Others were not, particularly when the Irish upset drinkers at the Cat and Mutton and threatened the wife of Patrick Dutton, the licensee, several times. A sign saying ‘Sorry, no Travellers’, was posted outside the Cat and Mutton.

A local resident, who did not use the pub and knew nothing of the disruption complained to the Commission for Racial Equality, which agreed that the sign was discriminatory. In June 1987 it took Dutton, to Westminster County Court for an alleged breach of the 1976 Race Relations Act.

Judge Harris dismissed the case, so the CRE appealed to the appeal court, where the CRE maintained that “travellers” was synonymous with “Gypsies” and that the no-Travellers sign was illegal.

The judges in the higher court accepted the argument and the commission won: Gypsies were a racial group, a decision that, though it had sprung from discrimination against Irish Travellers, would bind English courts and have what the law terms “persuasive authority” in Scotland for cases involving the ethnically separate Gypsies, people of Romany origin.

Gypsies had been passing through and living in Hackney for five centuries. No records have been found of their presence in Hackney during the 1500s but they were becoming known in London.

The statesman Sir Thomas More wrote in 1529 of having been told 15 years earlier about an “Egyptian” [Gypsy] woman who could tell “manye mervaylous thynges”.

The palm-reader was unlikely to have predicted what More and his friends had in store for her: 15 years later as Lord Chancellor to Henry VIII he was preparing legislation “concernynge outlandyshepeople callynge themselves Egiptians” that ordered them out of the kingdom on pain of death.

The laws had little effect, however, and generations of Romanies continued to tell fortunes in London. In the summer of 1663 Samuel Pepys noted in his diary that he had seen groups of them in then-rural South London. Five years later he took his wife to them to have her fortune told.

The plays of William Shakespeare include references to an “Egyptian” and his last play, The Tempest, written in the early 1600s, gave a slave the name “Caliban”, a word that any speaker of deep Romany will know means “blackness” or “darkness”.

Such knowledge by an outsider suggests that a lot of information on Gypsies was available to scholarship and that they have been better established in this country than once thought.

More common Romany words such as kher, a house, were entering English in various forms; in the example of  “ken” or “kenner”, to mean a house or a drinking place, a pub.

Another common Romany word chav, a boy/lad/baby, has only recently and to the dismay of Gypsies, been appropriated as slang to mean a person lacking aesthetic sensibility.

As London spread out, Hackney became a suburb of the capital and that offered opportunities to Gypsies: as fortune-tellers, traders of small goods and labourers they could benefit from the wealth of the great city.

Some families struck camp along Pond Lane (now Millfields Road), near Hackney Marshes in Clapton. The 1871 census lists Lees and Phillipses living in “Gipsey tents”, probably the same clan pictured in 1900 trying to keep still for the slow shutter of one of the bulky cameras of the time.

Some of their descendants have moved into houses or married non-Gypsies. Their Romany origins may be little more than a family legend.

Others still consider themselves Gypsy, and though they prefer to be called “travellers” because of what they see as the stigma of the G word, they have become settled, on private and council sites around London and the home counties.

But not in Hackney: the new traveller site, in Homerton Road near the Olympic stadium, has been allocated to Irish Travellers.

Other Gypsies have come to the borough. Since the break-up of the Soviet Empire from 1989 onwards, the Roma, ethnic relatives of London’s Gypsies, have been arriving in England. The racism that erupted after the bonds of totalitarianism snapped has driven thousands of them from the countries of Eastern Europe that have been their homes for centuries.

Like Britain’s Romanies, the Roma are believed to be descended from nomads who left northern India a thousand or so years ago, but there, apart from linguistic commonalities, the connections end.

The original Romany heritage has left local connections. Every June a blink-and-you’ll-miss-it display is held in one or two Hackney libraries to mark Gypsy, Roma and Traveller History Month and in the Mare Street museum is a standing exhibition of a model Reading-type horse-drawn wagon and a cart, probably the best such in England.

They were two of several miniatures made in prison by an Irish Traveller, Paddy Doran, and sent on permanent loan to the museum by his wife, Nelly, when she and her family were camped on a rubbish tip in Hackney 20-odd years ago.

There are also two Gypsy and traveller ‘units’, one run by the council and one in Westgate Street, two minutes’ walk from the Cat and Mutton, the now-fashionable pub where Irish Travellers inadvertently put the Gypsies on the road to ethnic recognition.

Note: the picture accompanying this story was updated on Friday 5 February 2010.

← Looking after the carersCold in Berlin →