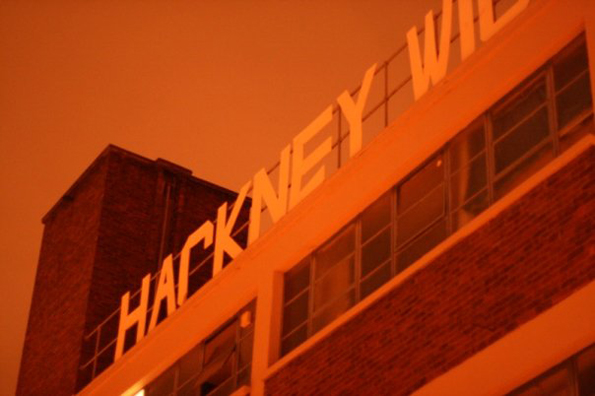 The crowning glory of Hackney Wicked 2008, the affectionately dubbed ‘Hollywick’ sign conceived and crafted by Laura May Lewis, will be resurrected for this year’s art festival.

Now in its second year, the three day gala event runs from 31July- 2 August 2009 and provides a platform to unite the myriad galleries and studios that have sprung up around the Wick enclave in recent years, including Elevator, Schwartz, Decima and Residence.

But this will be far from a polite private view, with a frenzy of antics promised, including the Fish Island street party, live graffiti jam session, flash mob punk choir, art fete and even a regatta, all culminating in the burning of The Wicker Man as a Sunday sun downer.

With such riotous and diverse happenings spilling out of every warehouse and live/work unit in E9 worth its salt, the eleven imposing white letters will once again provide a stark focal point against the skyline of concrete jungle-meets-Olympic park.

In an affectionate parody of the most famous sign in the world, Lewis has effectively embossed the letterhead of Hackney Wick’s self-styled re-branding manifesto. The widely documented influx of creatives has transformed this formerly grim industrial estate into an enterprising, resourceful arts community, pleasingly insulated from the hubbub of the rest of the borough.

When asked to draw a comparison with Hollywood in its infancy and the incandescent, sizzling Wick, she is adamant that “it’s the energy, the vibrancy of so many artists getting up and doing things, rather than the place itself that I wanted to represent.”

And any claims to iconic status? “It’s more ironic than iconic, definitely very tongue in cheek, although I had always been interested in the history of the Hollywood sign, and wanted to extend that.”

Delving into the chequered past of the original sign instantly reveals irresistible parallels between the early Chicago movie producers and the artist-pioneers of the East End.

The former, seeking space and sunshine, moved West into the frontier territory of California and appropriated barns for soundstages; not unlike the steady stream of the latter who have fled the rising rents and commercialism of Shoreditch et al to lease cheap, spacious warehouses and former squats on the far side of the A102.

A continent, a century, not to mention a whole lot of filthy lucre may lie between these post-agricultural and post-industrial pockets of renaissance, it’s true, but as Lewis suggests- the spirit is the same. The nine 50 x 30 feet letters gracing Mount Lee themselves are the descendants of an unorthodox LA real estate ad campaign of 1923 for the suburban ‘Hollywoodland.’

This heritage typifies the prevailing tension between artistic virtues and commercial potential that is particularly pertinent for Lewis and her contemporaries, given the Wick’s proximity to the Olympic development.

Simultaneously embodying civic pride, glamour, fame and aspiration, Hollywood writ large on the landscape is a semiotician’s dream of literalism gradually evolving into metaphor. As the sign itself became at turns the site of a 1930s starlet’s suicide and a pro-marijuana prank (‘Hollyweed’, 1973) rotting and corroding all the while, it gave rise to its own narrative.

Now re-envisaged through the fail-safe prism of irony, ‘Hollywick’ recycles a thousand associations that hang on that giant typeface, recalling, but also challenging Dorothy Parker’s assertion that “The only ‘ism’ Hollywood believes in is plagiarism.” This audacious yet playful gesture by Lewis is an elegant use of copy-cat kitsch in the vein of Warhol and Koons.

Bigger and better than last year’s plasterboard model, Lewis’s MDF creation has been three weeks in the making, painstakingly jig-sawed, sanded, painted, rigged up and illuminated atop Oslo House. It’s ephemeral, 90 by 122cm predecessor only withstood the elements until October of last year, perishing letter by letter- “I wanted to see it deteriorate over time,” the artist says, “just as the original did.”

However, the she is optimistic that the 2009 incarnation should survive “for as long as I can get away with it, my landlord willing.” Each 132 by 110cm cut-out capital has been auctioned off for ‘fifteen English pounds’ to local luminaries and businesses (the Hackney Citizen being the proud benefactor of the second ‘C’), in direct homage to the 1978 restoration campaign of the US forerunner, spear headed by Sting.

With the price tag set at a cool $27,777 apiece, Warner Brothers, Alice Cooper and Hugh Hefner himself were among the highest bidders at Playboy Mansion, first time round. For the comparatively diminutive re-working, the Citizen finds itself in the stimulating company of Spoonfed, Vinyl Pimp and a host of artists, musicians and filmmakers.

Just as the Hollywood sign has reflected the changing fortunes of the entertainment industry, so the shiny new Hollywick is testament to an increasingly sophisticated operation at the East Cross. “Last year was very much off the cuff,” admits Laura May, “we put it together in three months. This year we’re much more organised, we’ve formed a Community Interest Company, applied for funding and there are even more galleries involved this time round.’”

Already tipped by NY Arts Magazine as ‘the most vital art event of the summer,’ it seems the sky’s the limit for Wick ambition.