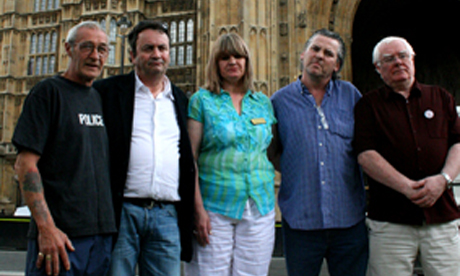 CAMPAIGNERS for Sam Hallam, the Hoxton man serving a life sentence in prison for the murder of Essayas Kassahun, sent a petition to Parliament today (15 June) calling for more funding for the Criminal Cases Review Commission (CCRC).

The CCRC, an independent body set up to investigate miscarriages of justice, has had its funding slashed in recent years, resulting in a backlog of cases and the resultant threat that justice might be being denied to applicants.

The 15 June date is symbolic – it is the anniversary of the signing in 1215 of Magna Carta, which promises “to no one will we refuse or delay right or justice”.

Supporters of the Sam Hallam Campaign, including the actor Ray Winstone and miscarriage of justice victims Paddy Hill and Billy Power of the Birmingham Six, Gerry Conlon of the Guildford Four and Patrick Maguire of the Maguire Seven, say that extensive new witness evidence proves Sam Hallam was not at the crime scene.

Patrick Maguire, who was wrongfully imprisoned at the age of 13, said: “It’s time the Government kept the promise made 800 years ago in the Magna Carta and stopped innocent prisoners like Sam Hallam suffering the nightmare of wrongful imprisonment.”

Hackney North MP Diane Abbott presented the petition to the Speaker of the House of Commons.

← Thurs 18 June: The Whole Day Through, with Patrick GaleIndian Summer: Glen Peters and The Shaitan of Calcutta →