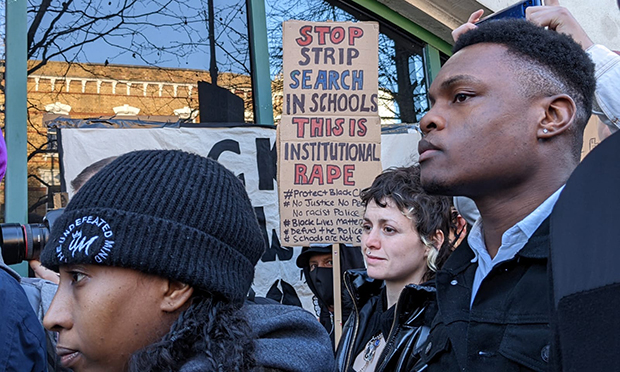 Protesters took to the streets when news of the case emerged. Photograph: Julia Gregory

The headteacher at the school where a Black teenager was strip-searched by Metropolitan police officers has stepped down due to ill health.

Parents learnt that a new headteacher has started this term.

Last term, it emerged that a 15-year-old girl, known as Child Q to protect her identity, was strip-searched while she was on her period.

Teachers called police after suspecting that she smelt of cannabis in December 2020 after contacted the safer schools officer for advice.

No drugs were found during the search.

The school was criticised for not challenging police and asking what they were doing.

A safeguarding practice review by the City & Hackney Safeguarding Children Partnership  said “school staff deferred to the authority of the police on their arrival at school”.

It added: “They should have been more challenging to the police, seeking clarity about the actions they intended to take.”

Child Q is taking legal action against the school and the police.

Their demands include stopping police presence in schools.

The school’s governors said: “While the school was not aware that a strip-search was taking place, we wholly accept that the child should not have been left in the situation that she was.

“For this, we have offered a full and formal apology to Child Q and her family, and continue to work with them to provide what support we can.”

Changes include the way the school works with police and a “rigorous and robust review” of safeguarding policies.

They said the move would “allow that school and its community the new start it needs to heal from this traumatic experience and by doing so also fully recognise the traumatic impact on Child Q and her family.”

The Independent Office for Police Conduct is investigating what happened.

Police have brought in new rules about strip-searching children and officers are getting training to avoid the adultification of children, especially Black children.