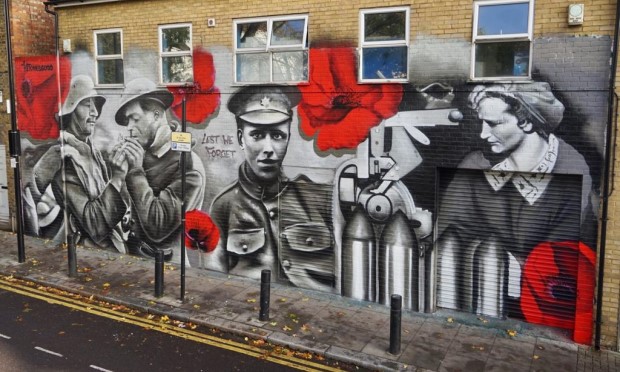 The Remembrance Day mural will stay up for at least two months. Photograph: Blank Walls

International street art collective Blank Walls has unveiled a huge mural in Shoreditch which pays tribute to those who served their country in the First World War.

The piece, on the wall of an aquarium shop on St Matthew’s Row, is based on photographs of a woman working in a munitions factory, a Bethnal Green man who was killed in action, and an English soldier and his German counterpart sharing a cigarette.

It was painted by Blank Walls’ lead artist and co-founder Jerome Davenport to coincide with Remembrance Day on 11 November, which this year marked a century since the end of the First World War.

Davenport, also known as Ketones6000, lives on St Matthew’s Row, and was commissioned by the owners of Wholesale Tropicals to do a piece last year. Since then, he has had the freedom to change the artwork every couple of months.

He told the Citizen he chose the subjects of his new mural, which features the words ‘Lest we forget’, through a research process honed during a previous project in nearby Bow – an artwork on the Lord Morpeth pub commemorating Sylvia Pankhurst, who lived in the area, and the East London Federation of Suffragettes.

“The woman working in the munitions factory is a great topic that closely related to what the suffragettes fought for – equal pay and support during wartime,” he explained.

“These women were called ‘Canary Girls’ because their efforts working with toxic TNT chemicals turned their skin yellow and they even gave birth to yellow babies – whilst being paid less than half the wage of their male counterparts.”

The second portrait is of George Gristey, who was born in Hackney and lived in Bethnal Green. Gristey served as a Private in the East Surrey Regiment and was killed in action in Belgium on 23 June 1915.

The third image, which Jerome says took his breath away, shows a German and English soldier sharing a cigarette on Christmas Day in 1914, when the warring troops famously agreed to a brief, unofficial truce.

“I don’t agree with war and I don’t think half the kids who went over to fight did either,” Jerome said. “But just to see that, no matter what, they could put their differences aside for a short time for Christmas and a few other occasions, which was punishable by death as it was classed as treason, just leaves me speechless.” 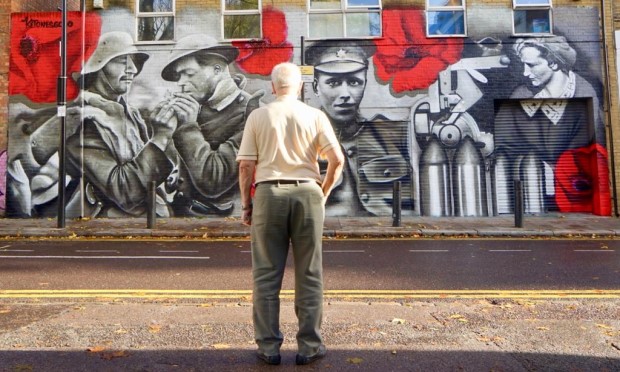 A passerby stops to admire the artwork. Photograph: Blank Walls

He said the mural, which took four days to finish, and other historical tributes he’s painted, “all resonate with me in a personal way”.

“I like to research in depth the subject matter, places and people which stays with you long after the mural has been painted,” he explained.

“You get into the mind frame of these young people, many much younger than me, and they were about to face the frontline of a war. It’s unfathomable and we are very lucky in our day and age.”

Jerome, who is from Perth in Australia, revealed that his great grandfather fought in the war until he was discharged after falling ill, adding: “That was lucky too as our family history may have been a little different.”

His Blank Walls co-founder and project manager Alex Harvey told the Citizen that his great grandad, Walter Edward Harvey, was an engineer in the Royal Flying Corp – he was born in 1900 and died in 1973, having lived on Walford Road in Stoke Newington.

Alex formed the art collective earlier this year along with Jerome and their Perth-based colleague Will Clark.

He said: “I met Jerome in May 2017, shortly after he landed in the UK, when I employed him for a job I was working on for Coca-Cola, where we worked at Urban Food Fest and Victorious Festival.

“From there, we discovered a shared ethos of making a difference through art and harnessing its power to make a positive difference around the world.”

They have since built Blank Walls into a street art management company which already boasts a roster of 17 artists from all over the world, offering their services to community groups, councils and landlords.

The group is already thinking about 2019, with launch events being arranged in Perth and London which will see artists painting live alongside DJs, street food and drinks.

As for the Remembrance Day mural, he expects it to be up for at least a couple of months, given how much it means to the group.

“There are no plans for another mural yet but we do like to keep the content fresh so the local community can enjoy new art.”

You can find the mural on St Matthew’s Row, E2 6AB, just off Bethnal Green Road.

For more information about Blank Walls, or if you have an art project you would like to discuss, head to blankwalls.com.au