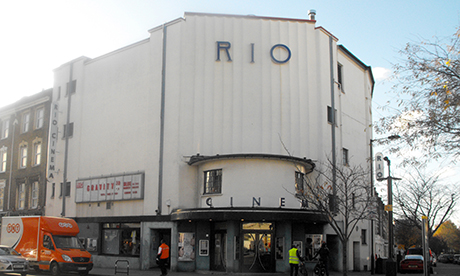 Staff at the Rio Cinema are to strike over low rates of pay and compulsory redundancies.

In a ballot on Wednesday (11 May), cinema workers voted to take industrial action, with the walk out set to take place on 25 May.

Employees are seething over the cinema’s reluctance to pay the London Living Wage (LLW) – currently set at £9.40 an hour – a figure regarded as the basic cost of living in the capital.

Last month cinema bosses announced a restructure that offers higher wages but which cuts hours and staff to pay for it.

The disgruntled workers have launched the SOS Rio campaign, and an online petition has attracted 2,250 supporters, including the likes of Hackney director Asif Kapadia and the actor Zawe Ashton.

The Rio employs 30 members of staff, many of whom work on a part-time or casual basis.

Two thirds of the cinema’s staff are in BECTU, the media and entertainment trade union.

In the ballot on Wednesday, 13 employees voted in favour of strike action, with seventy per cent of BECTU members casting their vote.

The strikers’ demands include a pay rise for all staff and commitment to the LLW, the withdrawal of the cinema’s restructure and threat of compulsory redundancies, as well as a “detailed five-year plan from the board on how they intend to grow the cinema as a community resource for low income families”.

“What started out as a simple pay dispute has turned into a passionate ideological battle over the soul of one of the last community cinemas in London,” said Sofie Mason, national official of BECTU.

“Staff want change but not change that rips the heart out of the Rio.”

The Rio Cinema’s executive director Oliver Meek said he was “at a loss” over the planned strike.

“I’m incredibly frustrated by this,” Mr Meek said. “I’ve already confirmed with staff that the vast majority would go from the minimum wage, which is currently £7.40, to 12.5 per cent above that to £8.10 an hour.

“The salary I’m proposing is more than many other independent cinemas pay, and this is really a first step.”

Mr Meek, who became the cinema’s executive director last year, has hatched a “regeneration plan” for the Rio, which would add a second screen and make the ailing business more sustainable.

“If we had a second screen we’d be able to pay the London Living Wage – which is what we should be doing,” he said.

“But effectively I’ve taken on a cinema that’s been failing for a decade so I’m not able to do so at this point,” he said.

The long-running dispute over pay dates back to 2013, when the cinema’s board announced the cinema was close to going under.

Staff agreed to a pay cut of 10 per cent over seven months, which, along with public donations, saved the cinema.

Then in October 2015 staff asked for a pay rise for all employees, as well as repayment of the 10 per cent wage cut from 2013.

However cinema bosses offered an increase to just £8.10 per hour for the lowest paid, which led to the collapse of talks in March.

← Stik’s NHS artworks to be auctioned in aid of Homerton HospitalTitbits – hipster brewing, Twitter pruning and the canine Tony Hawk →