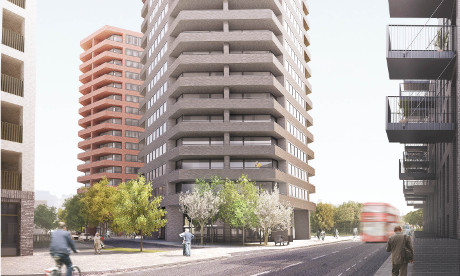 Colville towers: part of the regeneration scheme for the Colville Estate

Government plans for £140 million worth of estate regeneration will mean 915 fewer social homes in Hackney, according to new research.

Under new proposals the borough is set to gain just 15 affordable homes in their place, while 3,343 new homes will be created to be sold at market price.

Assembly Member Darren Johnson compiled the figures using data from the GLA’s London Development Database. They reveal Hackney will be the fourth worst hit borough for loss of social housing, after Southwark, Greenwich and Ealing.

Meanwhile neighbouring boroughs will see an increase in social housing, with 27 new homes in Tower Hamlets and 181 in Islington.

Darren Johnson, chair of the London Assembly’s Housing Committee, who obtained the data, called the plans a “complete disaster” that will “benefit wealthy property developers rather than ordinary Londoners”.

The estate regeneration scheme was announced in January by Prime Minister David Cameron, and will see council estates demolished to make way for new homes, with funds provided for local councils, housing associations and community groups.

Announcing the scheme, Mr Cameron said: “For decades, sink estates – and frankly, sometimes the people who lived in them – had been seen as something simply to be managed. It’s time to be more ambitious at every level.

“The mission here is nothing short of social turnaround, and with massive estate regeneration, tenants protected, and land unlocked for new housing all over Britain, I believe we can tear down anything that stands in our way.”

“We wholeheartedly disagree with the prime minister’s narrative and use of pejorative language when he talks about so-called ‘sink estates’,” Cllr Glanville said.

“These figures show only limited research into planning restrictions and regeneration – modern planning guidelines require a mix of multi-bedroom homes instead of simply replacing the high numbers of poor quality bedsits and one-bedroom flats that earlier decades built.”

Darren Johnson, a former Green Party councillor for Lewisham, has called for an end to estate demolitions, saying community-led renovation plans should be used instead.

“With a few exceptions, estate regeneration has been a complete disaster in London and has made our housing crisis worse.

“We need a focus on improving estates and building additional council housing, rather than flattening them and losing precious social housing.”

The worst affected London borough under the plans would be Southwark, which is set to lose 2051 social rented homes.

This article was amended 13:00 on Friday 26 January 2016. The original article showed a photograph of the Pembury Estate. This has been replaced with an image of the Colville Estate towers. – Ed.