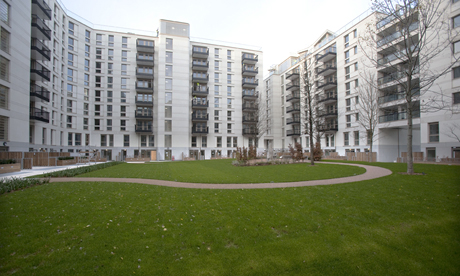 A view of the courtyard of block on the Athletes' Village on the Olympic Park. Picture David Poultney @ LOCOG

Hackney will only receive a share of 107 social housing units for its residents from the 2,818 homes in the Olympic legacy neighbourhood.

The Olympic Village will be converted into a new neighbourhood known as the East Village after the Games end. It will be made up of a mix of one or two bed flats and three or four bed homes.

Triathlon Homes have announced that 675 of their 1,379 affordable homes in the East Village development will be allocated for social housing.

Councils will be able to nominate tenants for social housing in the development as part of Triathlon’s new letting strategy.

The forecasts suggest Newham Council will receive 348 homes while Barking and Dagenham, Hackney, Havering, Redbridge, Tower Hamlets and Waltham Forest will have 107 homes shared between them. The rest will be administered by Triathlon Homes and the Greater London Authority.

Hackney Council is involved in discussions about the allocation process as a member of the East London Housing Partnership.

A spokesperson from Hackney Council told the Hackney Citizen: “The criteria are still under discussion and yet to be finalised but will broadly be in line with the existing lettings policy.”

The East Village will be open to residents in 2013 and many homes will be allocated to tenants soon after the Olympics end, up to a year in advance of the move-in date.

The decision on what type of property will be made available for social housing has not yet been finalised.