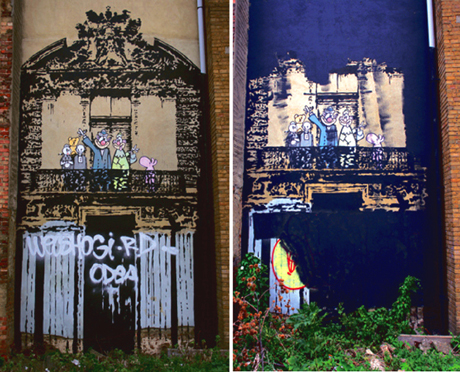 The bottom half of a well-loved piece of public art in Stoke Newington Church Street was painted over by the Council’s graffiti removal contractors yesterday (Thursday 27 August).

The building on which the graffiti is painted is privately owned.

The owner was sent three statutory notices by Hackney Council over the past three months, asking her to either cover up or remove the graffiti and she failed to reply to all three.

After receiving no response the graffiti removal team was sent in, at which point the owner said she had not seen the letters.

After investigation, Hackney Council has found that unfortunately the notices failed to reach her because her address was wrong in the Land Registry.

When asked by the Hackney Citizen why the top half of the graffiti piece was left untouched, the Council explained that the removal was half-way through when the owner appeared and said she had not been told it was going to happen.

The council removal team decided to halt and re-assess the situation before continuing.

The Council is currently in talks with the owner as to how to resolve the issue.

Cllr Alan Laing, Cabinet Member for Neighbourhoods said, “Hackney Council’s position on graffiti is not to make a judgement call on whether graffiti is art or not, our task is to keep Hackney’s streets clean.

“This cleanliness is judged by the Government on a number of factors including levels of graffiti. We do not target particular types of graffiti.”

More on this story here and here .